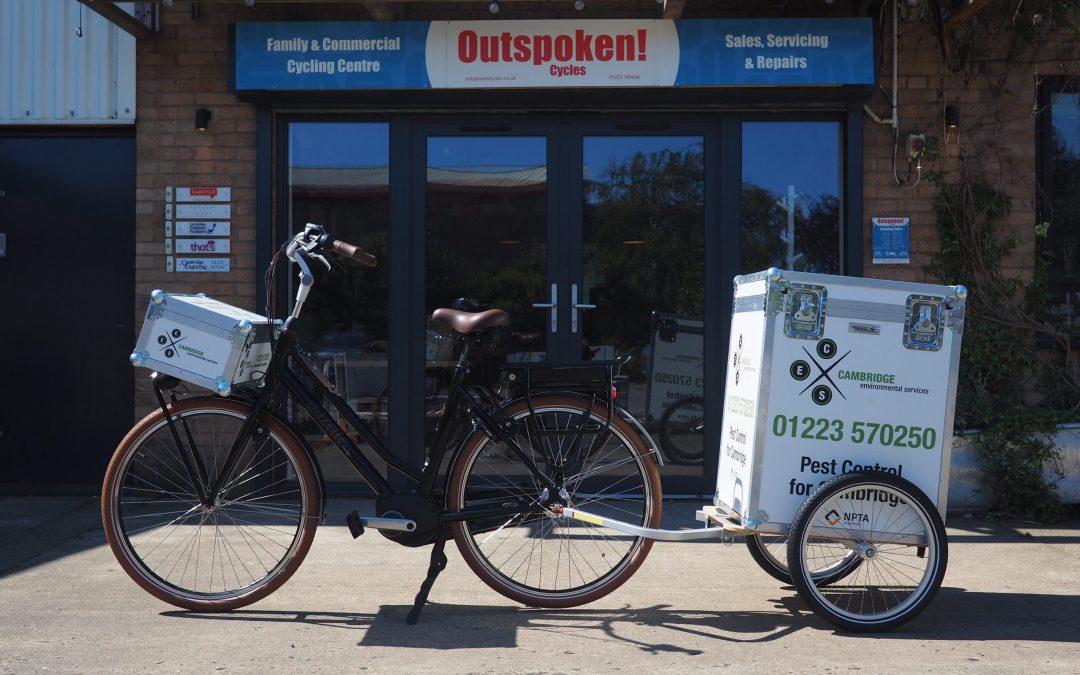 Russell runs the Cambridge-based pest control company Cambridge Environmental Services and first approached us in June 2019. He had just taken on Gareth as a new member of staff and as Gareth is a keen cyclist, Russell wanted to explore if it was possible to use a cargo bike for his runs, rather than another van.

For Russell, the extremely low running costs compared to a van and ability to park in central Cambridge wherever needed, as well as the visibility a cargo bike could give to his business all made it an attractive option. He was also looking to reduce his carbon footprint.

We always start by assessing needs, including frequency of use, required capacity, type of load, terrain and any other specific needs or preferences.

For Russell he wanted sealed, lockable storage for his pest control kit with a separate container for carrying long tools. He also wanted the bike to be branded and electric, and knew he would prefer two wheels, but not having a large box on the front like a Box Bike style. He also liked the idea of additional storage for smaller and quick access items.

From Russell’s brief, we suggested a dedicated delivery E-Bike from dutch bike-specialists Gazelle, coupled with a box trailer, with further storage on the front of the bike and the option for branded panniers, giving plenty of storage but also allowing flexibility.

“We have found that the main benefit was the money we saved.”

Gareth was able to try one of Gazelle’s low-step delivery bikes, the Miss Grace C7 HMB with the highly regarded-Bosch mid drive motor and really valued the ability to quickly step on and off the bike.

After the successful test ride the bike was confirmed and we sent Russell options for a trailer and box, eventually settling on the very versatile and lightweight Carry Freedom Y trailer with a bespoke lightweight locking flightcase box, which we weather sealed.

We then added a further small locking box on the front rack of the bike for small items and, after a period of testing, a large tube for housing the pest control hose and spray wand.

Russell has told us “”a round that took me a day in the van is now complete in a morning.”

“We have found that the main benefit was the money we saved. Buying the bicycle meant that we didn’t need to buy a van and pay all the associated costs that came with owning and running a van, such as insurance and servicing.”

“For city centre contracts where road restrictions are in place, the bike is invaluable as it means we can get to the customers premises quickly and easily, without having the hassle of finding somewhere to park and paying the parking fees.”