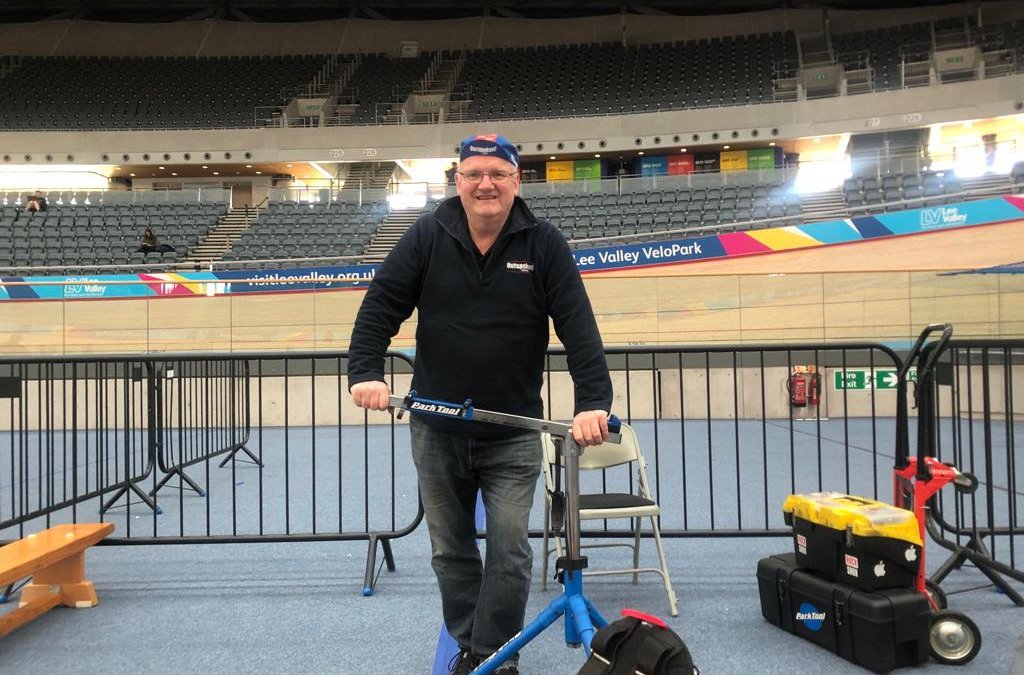 When our senior mechanic, Richard, is not in the workshop servicing bikes, he can often be found discussing all things cycle racing and all the fun he has working at bike races. On the 13th March, Richard was at iconic Lea Valley Velodrome, representing Outspoken Cycles, as a neutral mechanic for the qualifying races for the British Cycling National Youth Omnium.

The role of the neutral mechanic is to ensure the racers have bikes that are safe to ride as well as give advice to those racing. As coaches and parents are barred from entering the indoor velodrome during these races, Richard was there as the cycling professional so that the young racers had the safety support their coaches usually provide outside the velodrome.

Whilst this wasn’t Richard’s first time as a neutral mechanic, he is still fairly new to it and appreciates the undemanding nature of the role. The best part for him is getting to watch the races with this event having some brilliant and exceptional racers. Coaching for a club in Welwyn Garden City, Richard was also lucky enough to watch some of his team race as well as size up the competition!

The track bikes used in racing have fixed gears which Richard had to check before the races began. These bikes are ridiculously lightweight as almost everything is made of carbon fibre and it takes a lot to master riding these bikes. That’s the beauty of racing for Richard; a lot of finesse is required to truly excel in the various types of velodrome racing. Richard also appreciates the focus cycling gives people, with his own children being very successful cyclists. It was through taking them to races that Richard developed his own interest in racing and it’s only his age that stopped him from taking part in the sport as a racer himself.

As a mechanic, Richard prefers servicing and fixing racers as he complains that cargo bikes are far too heavy to get on to the stand – another benefit of the carbon fibre frame! Whilst we don’t sell any racing bikes here at Outspoken, Richard would be more than happy to take a look at racing bikes (and any other fixed gear bikes) as we offer servicing for virtually any standard or electric bike. To find out more about the work our mechanics do, follow the link here.

Richard is looking forward to the coming months as the racing season starts up again, officiating at an upcoming event in April and working in various capacities at a couple of events.